Hello, well it looks like 2008 is coming to a wrap and since the remaining 2 weeks of December will find me traveling to Baltimore for the production of Alice in Wonderland featuring my artwork as backdrops and props, then on to a much needed rest in Florida for Christmas, I'm trying to get the December bug in the mail as early as possible to those who have already sent in their submissions .

With the end of the year comes the last of the 2008 series Berube-Bugs. Fret not, I'll be continuing the project into the new year, with a fresh batch of creatures. As long as you send them in, I'll send them out. I want to thank all of you who have contributed to the project over the past 6 or so months, and especially those "regulars" who month after month show me just how brilliant your talent really is. I look forward to the new year and all the creatures it may bring. 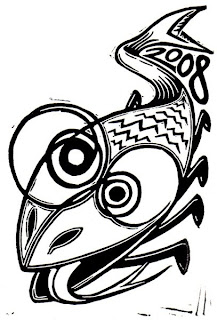 Posted by David Berube BerubeArt at 9:38 AM

Hey C.L., Thank you. Much appreciated. I love your recent series as well.