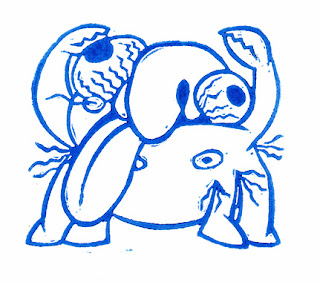 I started feeling a little off kilter on Monday but just figured it was a little cold so I dosed up on various vitamins and acetaminophen and worked Tuesday and Wednesday assuming that I'd be fine. Well, by Thursday morning when I got up for work I could barely move and by Friday I had a fever of 100 degrees. The last time I was this sick was probably 10 years ago while traveling in France, so it's been a while and I had forgotten just how annoying it is to be that sick. In my opinion being sick is nothing more than an inconvenience and an utter waste of time. And feeling like I had to be able to do something while I felt like crap, I decided to draw this Berube-Bug while in the throws of this cold/flu thing.
Posted by David Berube BerubeArt at 9:17 AM

I have to say that bug certainly does look sick!! Must be the weather, everybody I know is sick!
I know I am sick of all the snow!
When is summer coming?