TOM THE TURKEY SAYS - THANKS FOR NOT EATING ME THIS YEAR

A few years ago a friend of mine in North Carolina had a turkey that she had raised from a baby who as he grew up became quite accustomed to following her around the yard and if you weren't careful into the house as well. He became much more than the turkey that he was.

She also had a number of large dogs who weren't to keen on Tom The Turkey moving in on their turf...... End of story.

So I created this piece in memory of Tom. 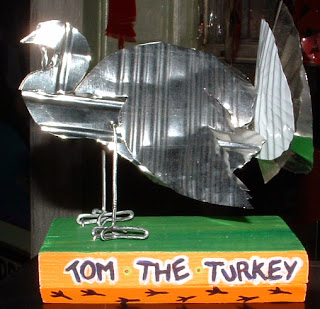