Sitting at my desk this morning after walking the dog, getting the morning trashpaper, (the post), and slowly emerging from the haze of my 2-week work stretch, the firetrucks came zooming up 10th ave and 52nd street, and stopped at the opposite corner that I live on. As I live above a restaurant, my initial thought is, "well it can't be too bad, I don't smell the smoke yet." And then I start to think abt. the amount of artwork I have here in my studio and throughout the apartment in general. After being here for nearly 10 years, and if you know me, you know that if i'm not at some insane freelance visual job then i'm probably home printing or working on some other project, trying to rescue my soul from the depths of reality. So.... there is a shitload of artwork here and I'm trying to figure out what comes with me and what perishes.

As the firetrucks pulled up, I noticed that the sprinkler system in the restaurant across the street was going off as well as the sprinkler system in the apartment above it. The firemen eventually broke into the restaurant, got into the apartment above and were up on the roof checking for whatever else they check for on the roof. (The last time there was a fire there, yes, this happened before, it was actually flames coming out of the chimney on the roof). Long story short, no-one was was hurt, lots of water damage and something was actually burning because when I walked the dog past it later in the day and the workers/owners from the restaurant were shoveling debris out the door, I could smell the distinct aroma of wet, burnt wood.

So, as the firemen and policemen were finishing up with their work it turned into a great social event with 30 or so firemen and policemen standing around, shaking hands, slapping backs and having a good ole time. I don't know if it's like that in most cities, but i do know that after any large "event" here in the city and as many times as I've witnessed large "events" here on my corner, it's always the same thing and invariably turns into a bit of a party. But what really impressed me the most was the firemen and policemen standing there enjoying their cigarettes, big puffs of smoke coming out of their mouths.

Every window is a different channel!!! 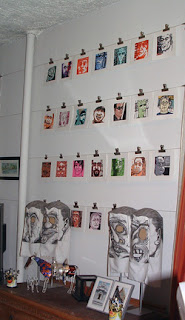