I have a few friends that I've designed tattoos for over the years, myself included. Sometimes people see a piece that I've already printed or something in the process of being worked on and they say, "That would make a cool tattoo", on other occasions I've been commissioned to design a piece for them having been given a few details of what they would like included. Not one to disappoint my friends I'm more than happy to let them permanently "borrow" an image.

This week, my friend David is visiting from Shanghai, he has one of the most amazing pieces on his back that I designed initially as fun little side project testing my abstract skills. He took a look at it and it was one of those moments the lightbulb clicked on and he said, "That would make a cool tattoo". We toyed around with the location and ended up on his back along his spine, I added to the original length of it, but the rest is history. 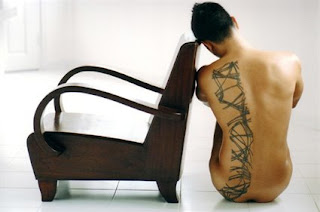 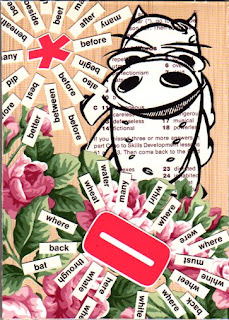 I usually don't cross post my own blogs on my own blogs but in an effort to show that despite my having not posted in my "BERUBE" blog for the past week and prior to that giving you images from my archives, I decided to cross post an image from my PORTRAIT MAILART REPLY blog to show you that despite working like a crazy person this past couple of weeks outside of the studio I have in fact sent out a number of altered "Portrait" post cards. The image above is being sent out to Nicole Eippers in France who has a mailart call asking for images of pigs, this is my 6-legged version. OINK, OINK, OINK.
Posted by David Berube BerubeArt at 8:58 PM No comments: 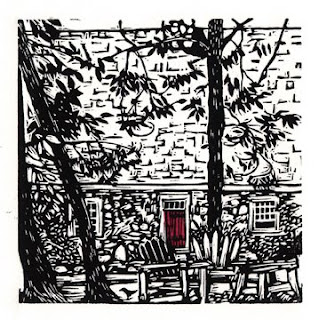 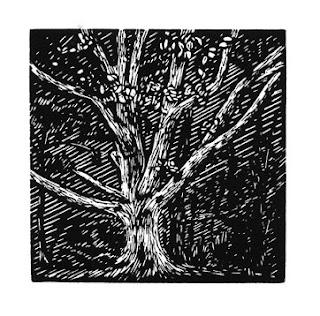 The same year that I took a trip to Maine and spent some time on a beautiful small-sized lake producing the images in the post just below this one, I spent some time at a friends property in upstate New York in the town of New Paltz. It just so happened that as I was drawing on my linoleum while standing in the front of the property looking at the neighbors horse barn a deer crossed right in front of me. The results are in the second image.
Posted by David Berube BerubeArt at 10:24 PM 1 comment:

ON THE LAKE - MAINE / FROM THE ARCHIVE 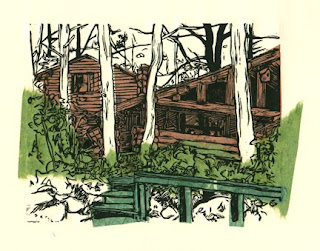 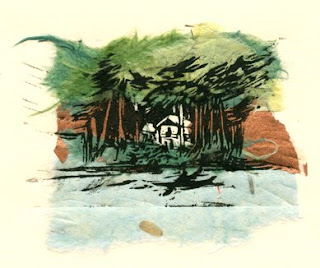 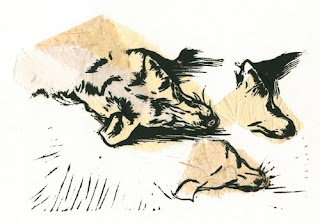 A few summers ago I was invited to join a few friends for a weekend in Maine on a small lake. Aside from hanging with a small group of creative friends, drinking wine and playing in the lake, I was also commissioned to create a few prints for the homes owner. The first 2 images were for the owner, the last image of "Val" was for my friends who asked me to come along. Invariably, I produce a number of prints inspired from all of my trips, so anyone out there willing to host me for more than a weekend, you'll end up with some fun company, a hard worker if necessary and a few original prints for your personal collection. All International and Domestic offers welcome!!!
Posted by David Berube BerubeArt at 8:36 PM 6 comments: 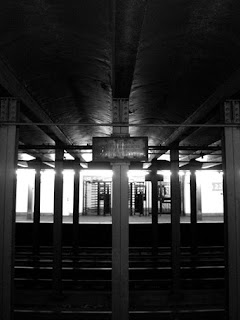 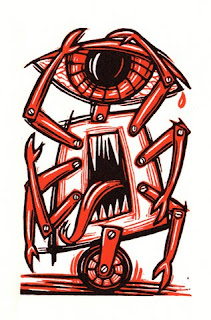 I have the above print included in a traveling group show presently on exhibit in Seattle Washington at the Pratt Gallery space in downtown Seattle. Located in Pioneer square, on Washington and 3rd Ave inside the Tashiro Kaplan artist bldg. The show runs through March 29th. Open Fri. & Sat. 12 - 5pm. If you're in Seattle, check it out. 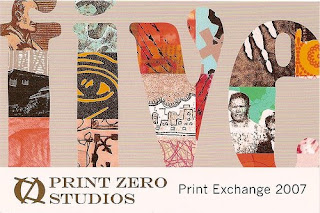 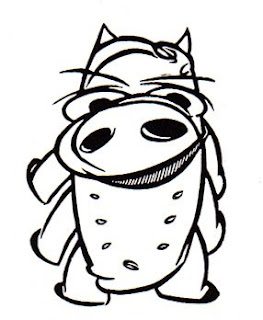 Cami is a good friend of the earlier bug "taMI", they run in the same circle of gals, hang out at the same bars, listen to the same music, ride motorcylces....
Posted by David Berube BerubeArt at 7:47 AM No comments:

I just received a few pieces of artwork from my online friend Bert Dombrecht. We've been communicating via the internet for the past year or so and I've been amazed with the talent this young guy has. He just recently had a children's book published in Belgium featuring his illustration work. At this point it's written in Dutch by Bart Van Nuffelen, but the illustrations and the story are universal.

From the publisher:
"It is summer. Anton sits in a small garden in the middle of the city. He is jealous of the heroes in his books. His mother never lets him do anything exciting. Then Steve turns up. The two boys climb onto the forbidden stair and imagine that they are steering a submarine. They are so busy playing that they do not see the whole city is worried about them."

A few of Bert's Illustrations: 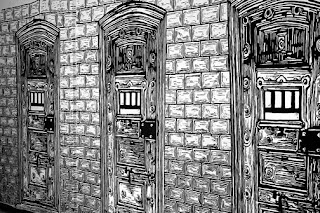 Recently, Scott Rink uploaded a short promo video to his website including snippets of the 3 short films that we collaborated on. The "Films" portion of the reel with images of my handiwork, including props, set design and printed hoods is towards the end, so enjoy the rest of Scott's brilliant choreography prior to the film work.
Posted by David Berube BerubeArt at 9:43 AM 2 comments:

VIEW FROM THE WINDOW - INSPIRATION 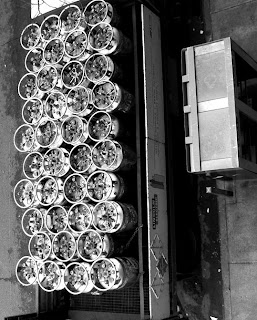 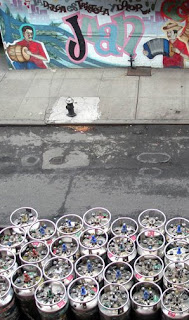 Being fortunate enough to be an artist and live in an apartment with 8 windows on the corner of 52nd and 10th, every once in a while, (actually, quite often), as I pass by a window something catches my eye. It was the repetitive pattern of the liquid oxygen tanks on the back of this truck parked right downstairs that did it this time. I guess we find inspiration where we can.
Posted by David Berube BerubeArt at 5:03 PM 1 comment: