MISSING NOVEMBER BERUBE-BUG or "The Bug that almost wasn't"

There are some pieces of artwork that just beg to never be finished. For all intensive purposes, my November 2009 Berube-Bug should have been one of those pieces.

If I was a few years younger, had less patience, or wasn't such a stubborn fool, this piece of linoleum would have ended up tossed out of the window as late as last night when I committed to finally printing it after starting it almost 6 months ago.

Based on a trip to Virginia for Thanksgiving, the image was a culmination of watching hours of bloody video games with no less than 5 military in laws and friends as well as spotting Turkey Vultures for the first time in my life flying over the farm fields along the drive to and from Virginia.

I started the piece as soon as I got back from the trip, instantly having problems with coming up with the image I wanted. The initial drawing, (PIC #1 below), was what I initially came up with. That image sat on my desk until I finally gave up in December. I believe in January, I decided to give it a go again, this time by not finishing the initial drawing and starting out with a new, relatively different concept.

Somewhere between January and May, the piece was drawn, redrawn, redrawn again and then cut, little by little until I actually finished cutting it last night while I was printing it. One of the problems with putting one of these pieces on hold is that, there's a lack of continuance, the things I would normally discover and fix as I'm working on the piece become forgotten. So, as a result of that, I did my test print and realized that some of it wasn't working. At this point, I figured, I've waited this long, don't kill it now, try to fix it and call it done.

Having said that, I'm not completely pleased with it, but feel that a lot of my perceived questioning will be fixed with some color added to the image. 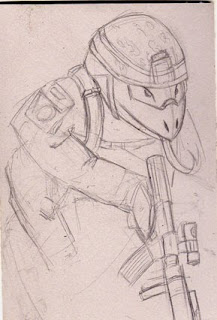 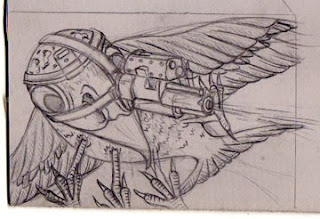 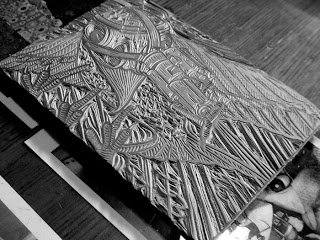 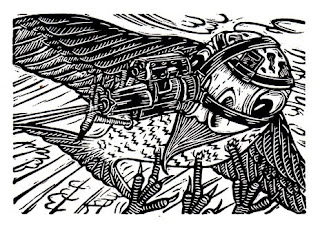 "A" Is For AARDVARK

Well, after a many month dry spell, I've finally printed up a new piece. Decided to start another alphabet series, this time printing up postcard sized images so that I can double the fun by sending them out to my mailart friends. 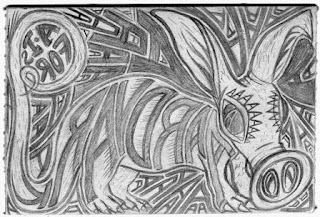 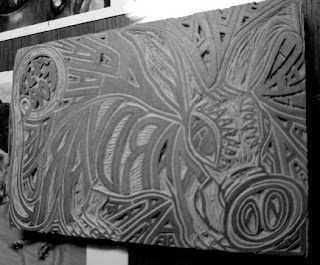 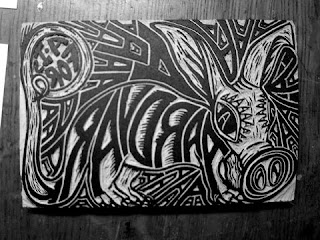 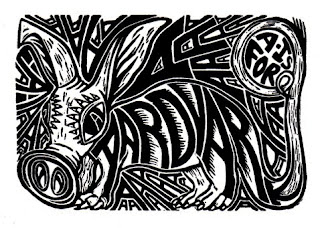 Posted by David Berube BerubeArt at 8:52 AM No comments: