These are the first 3 lino's I've cut and printed based on the sketches from my trip to Chiang Mai, Thailand as part of the group Volunteer Positive. (And one linocut from my friend Phra Kritsada Prueprong) The first 2.5 weeks was spent in service which afforded me very little time to actually draw on my own, most of the prints from the full series were sketched out on my last week in Chiang Mai. The only 1 of these 3 lino's that was sketched during my actual service is the Elephant sketches print. We spent an afternoon at the BAAN CHANG ELEPHANT PARK in Chiang Mai where after a educational introduction to the Asian Elephants in residence we had lunch and a few minutes to digest our food before the 2-hour trek we were about tro partake in. Having not had much opportunity to do any prior sketch work, I had the foresight to bring along a few pieces of pre-cut lino and stole away for 20 minutes after lunch and did these sketches. Let it be known, elephants do not stand still, ever. It was a challenge to get a complete sketch, which explains why there are so many partial elephants in this print.

The print of the Monk is in fact a dear friend I made while in Chiang Mai. He is a 20 year old Monk named Phra Kritsada Prueprong originally from a village outside of Chiang Mai in Loei province. We were paired up as part of something called "Monk Chat" which is an event that creates the opportunity for local monks to practice their conversational skills with English speaking foreigners. On this particular morning, Kritsada and I took a tour of a few of the local temples and I decided that since he would share with me, I would share with him by having us both work on a lino sketch. I offered to take his drawing back to NYC with me where i would cut it out and print it for him. I had no idea that he could actually draw and was quite talented. It turned out to be an incredible opportunity for the both of us.

The print of the banners was from Wat Phrasingh in Chiang Mai. I'm not sure of the exact purpose of the banners, but if you look carefully, you will see representation of 3 Birth Year Animals. As there were many more banners there, I assume that's what they were there to represent.
SKETCH OF ELEPHANTS ON LINO 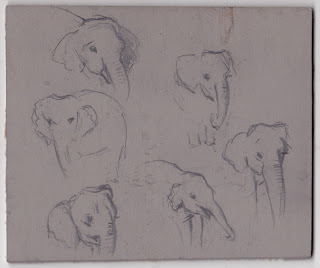 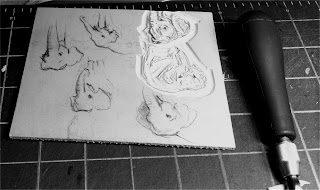 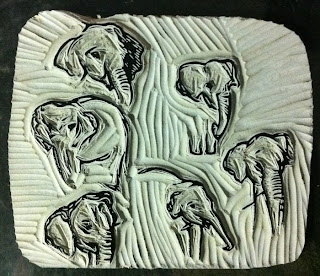 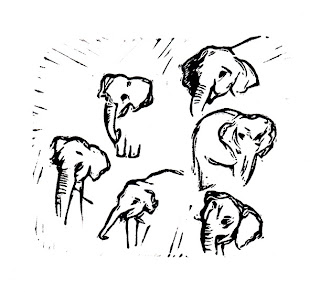 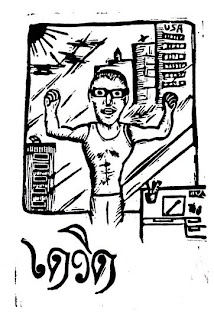 PORTRAIT OF KRITSADA - BY DAVID BERUBE 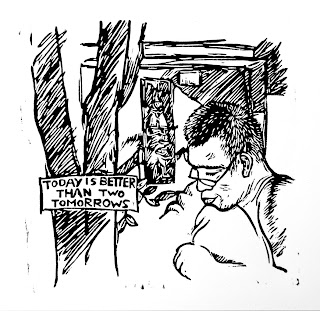 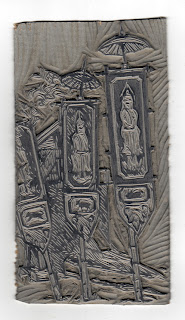 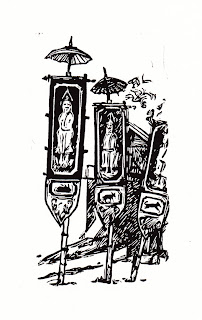 Posted by David Berube BerubeArt at 7:17 PM No comments:

Additional sketches from Chiang Mai, Thailand, from my travel sketchbook. 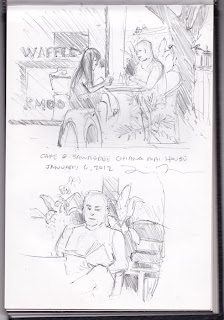 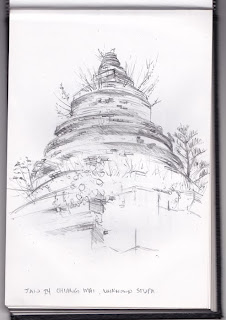 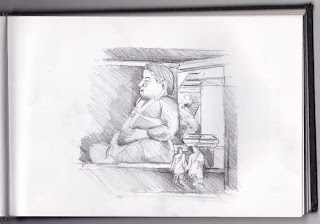 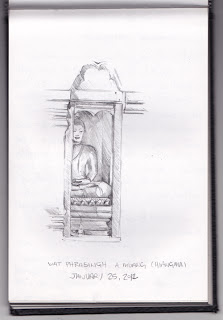 Posted by David Berube BerubeArt at 9:06 AM No comments: