"Having lived 16 years just a few blocks away from The Intrepid, it's easy to forget about it. Today was the perfect occasion to remind myself how fortunate I am to live so close to the Hudson River." - March 28, 2012 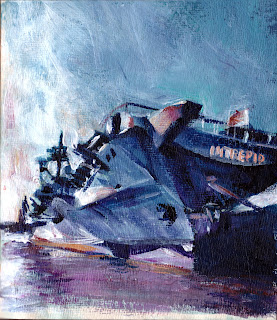 Posted by David Berube BerubeArt at 11:04 AM No comments:

Here's my latest acrylic "sketch" based on a photo I took of a Tibetan Buddhist sculpture at The Rubin Museum of Art in NYC. My sketch is approximately 4" X 4", acrylic paints on textured paper. Unfortunately, because I used metalic gold paints, reproduction of my painting isn't the best quality. The subtlties of color in my painting are not obvious in the photo. 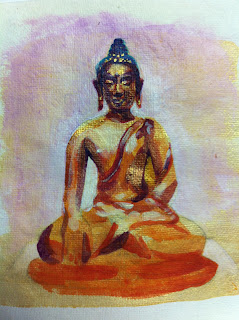 Posted by David Berube BerubeArt at 6:08 PM No comments:

I've been in a bit of a linocut burn-out phase after cutting and printing many of my linocuts from my recent trip to Chiang Mai. I've also been craving doing some color work and some painting, so I broke out the acrylic paints and brushes and did this quick little "sketch". If you've been keeping track of my recent linocuts, you'll have seen a similar image printed of this same subject. What I've learned to do over the years is to always photograph the image I am drawing on to lino when i am traveling and doing an on-site lino drawing. The reason for this is to have a refer4ence shot of whatever it is I'm looking at just in case I decide to add color to the lino or I have trouble understanding what I drew. This is my friend Phra Kritsada Prueprong, a 20 year-old Buddhist Monk I met and became friends with in Chiang Mai. 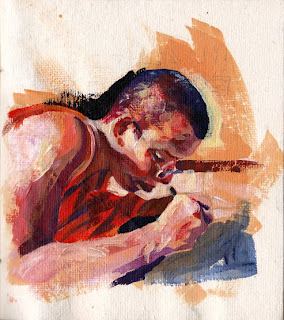 Posted by David Berube BerubeArt at 3:38 PM No comments: 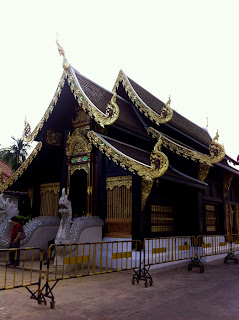 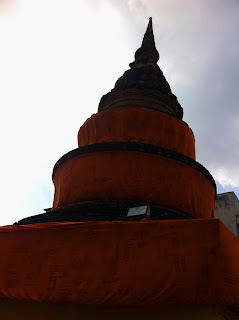 The afternoon I arrived in Chiang Mai, absolutely exhausted from a 24-hour travel period, I had time to myself before meeting the rest of the Volunteer Positive group for our first dinner together. In a bit of a daze and reluctant to stray too far from the guest house/hotel for fear of being lost in the metropolis that is Chiang Mai, (ha, ha), I decided to take a little walk. I figured my best bet was sticking to the main roads and relying on my experience with using visual markers as my guide. The place I finally ended up at was Wat Intakhin, or Wat Sadue Muang depending on who you ask. This relatively unassuming Wat that stands just to the left of the “Three Kings” sculpture was the first Temple I saw while in Chiang Mai. I didn’t go in, just took a peak through the open front doors, looked in through a side window and eventually discovered the beautifully wrapped Stupa that eventually became this linocut.

In retrospect I realize how silly I was being. This particular Wat is comparable in distance from the hotel as a 4-block walk in NYC, yet at the time, on my first day, it felt like a 30 mile walk into the unknown of a foreign land.

It became a spot I would see or walk by almost daily during the rest of my 3.5 weeks in Chiang Mai, so it has a special spot in my heart. I started out on this journey rather hesitant and fearful of the unexpected and ended up eventually discovering so much more about Chiang Mai and my self. I ended up spending my entire last week hanging out in a number of the 80 Temples that dot the city like Starbucks dots NYC. I became adventurous in my exploration, I even learned the proper way to enter a temple and prostrate to Buddha. I walked around the city like I would walk around NYC and documented my journey through 100’s of photo’s as well as sketches on postcards and finally linoleum.

So, to Wat Intakhin and the gentleman who sat down next to me for a good 1/2 hour the afternoon I was drawing this particular linoleum, I say, “Thank you. You will always have a special place in my heart. Despite the fact that you and I could not communicate verbally, your kindness was obvious and indicative of Chiang Mai. I will always be grateful.“ 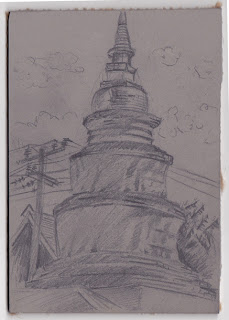 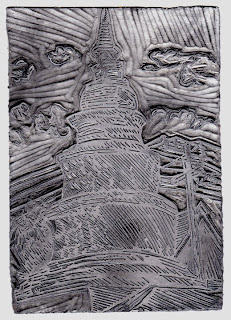 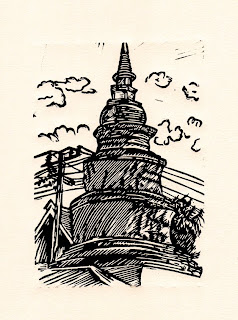 Posted by David Berube BerubeArt at 10:03 PM No comments:

Here are the next 2 prints from my Chiang Mai Series.

Th first print, an "Alley Scene" is described in the following excerpt from an interview i recently participated in.

"I’m currently working on the series of linocuts I created while I was in Chiang Mai in January. And the one piece I’m cutting out right now was drawn the afternoon after I had sliced 2 of my fingers open quite badly the night before. I had limited time to draw on my own during my service and was looking forward to spending as many days on my own as possible wandering through the city “recording”. I was pretty disappointed when I woke up the following morning as I could barely bend my figures, each time opening the wounds and having blood pour out. But, I bandaged the hell out of these 2 fingers, grabbed my art supplies, a bottle of water and my backpack and headed out anyway. I’ve worked under far worse circumstances. It was another beautifully clear and already warm early afternoon and I found myself wandering through the back streets of old Chiang Mai. I passed an open-air garage where a young man was creating what I assumed was religious iconography by hand-stamping various sizes of tools into a sheet of metal. I passed someone’s yard whose fence was covered in a somewhat unkempt fragrant flowered vine that smelled beautifully. And then I spotted something I wanted to draw. I found a great vantage point next to a fence and in the shade. Standing here, you could smell the scent of incense wafting around in the air, with so many temples in the old city, it’s not an uncommon smell. Every once in a while a motorbike would whiz by or a kid dressed in their school uniform would pass. Occasionally they would pass close enough to take a peak at what I was drawing.

Just remembering all of these little details brings a smile to my face." 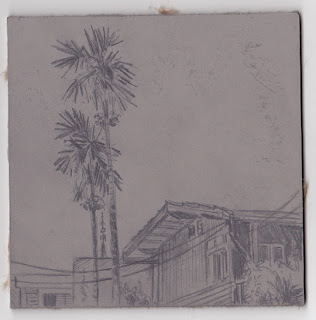 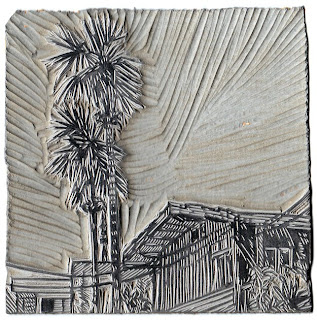 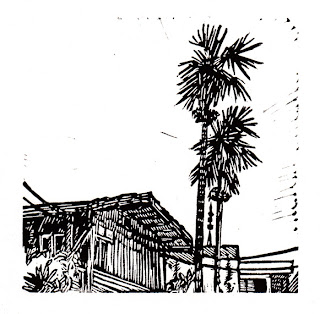 This second print is from a drawing at one of the local temples in the old city. Unfortunately, I did not make note on the back of it as to which temple I was at. If I can find some online reference, I'll be sure to add it here. 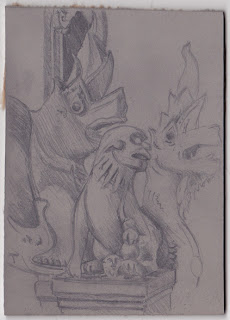 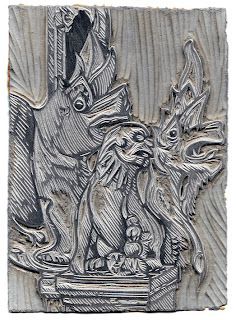 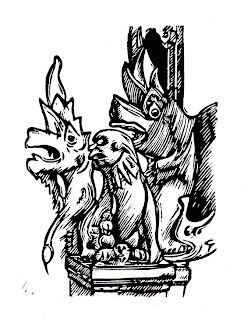