I just finished a linocut that I drew while up in Eureka California the day after my birthday. I sat outside the chicken coop at Brandon's friends David Cobb and Kaitlin's house and did some really quick sketches. As you can imagine, it's a bit like trying to sketch a roller coaster while in motion, as the chickens were as interested in me as I was in them and in perpetual state of movement.

I decided to add a little color to the printing process this time by using a technique referred to as "chine-cole" in which pieces of paper are applied to the inked lino, a bit of glue is brushed on to the added bits and then the actual paper you're printing on is placed on top of that and the wole thing is put through the press. Since I tend to use rather small pieces of paper that conform to the actual images on the lino, it can be a rather tedious process. The great thing abt. this is that you never really know what the printed piece is going to look like because of the types of papers used and the amount of layering you decide upon. It's definitely a hit or miss process and I can tell you firsthand that I have completely given up on other prints trying to use the same technique. Tonight, I'm proud to say, was a success. 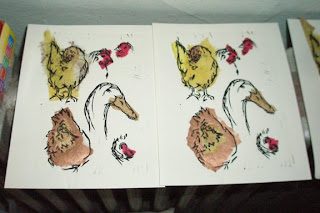