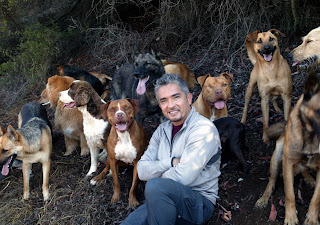 While I was working yesterday at 11 west 42nd street and hopping on to the elevator on the 19th floor, I heard a voice that sounded vaguely familiar. Two guys in a rather animated conversation were getting off of the elevator as I was getting on. As I turned back to see the people, I realised that it was in fact Cesar Millan, "The Dog Whisperer". He was going to the NPR studio on the 19th floor but before I could recover from the surprise of seeing him there and remember his first name, the elevator doors shut. It was truly a pleasant surprise and I only wish I would have reacted a little sooner as there wasn't a crowd of people around and I could have actually said "Hello" without feeling pressured. I guess he's in town for a few lectures and is doing a book signing here in the city later in the week.
Posted by David Berube BerubeArt at 10:33 AM

Cesar Millan was lucky to bump into you!