Somewhere along the way I decided to send myself postcards from the various places I've visited over the years including: China, Thailand, Italy, France, Puerto-Rico and all over the U.S. This last week while in Florida I brought along a bunch of post cards to mail out to others as well as myself. It was a great way to relax and do a little no-stress art while vacationing. The version of the card I sent to myself includes the original linocut with some color pencil added and a watercolor image of the ocean and clouds I was admiring while sitting under a palm tree in a state park on the tip of Key West. I also added some collage work from the map we got at the guest house we stayed in, in Key West. The concierge scribbled so many directions on the map it was virtually impossible to discern what he talked about when he was giving us tips on where to go, what to eat, the best beach...... I also added some watercolor and peeled away some layers of the card later while in Ft. Lauderdale.

I still have 4 more cards left, if you're interested in receiving one, let me know. Otherwise they'll be buried in a pile in my studio and lost forever. 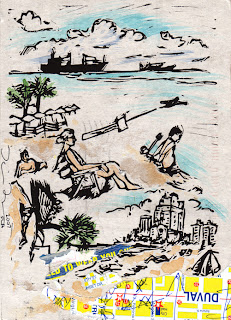 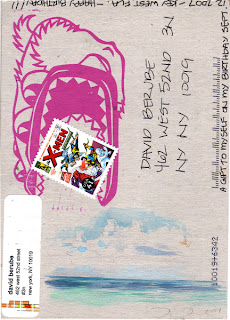