Upon my return to the city, I discovered taxis covered with gigantic brightly colored flowers. Figuring that it would eventually be exposed as some evil ad campaign by Target, Walmart, Old Navy, The Gap, (take your pick), I was pleasantly surprised to find this article from the New York Times "City Room" Blog. Not so evil afterall.

The pics below are from my studio window this afternoon.

From the N.Y. Times:

"It's an idea that seems more like Woodstock, 1969, than New York City, 2007, but it has the Bloomberg administration's blessing and the city is going ahead with it.

Starting today and extending through December, hand-painted, adhesive, weatherproof images of giant decorative flowers will be applied to the hoods, trunks or roofs of New York City's yellow taxicabs. Ninety percent of the flowers were painted by children from the city's public schools and hospitals; a fraction were painted by children in New Jersey, Philadelphia, Atlanta, Cleveland and Los Angeles.

The flowers "will soon transform the ubiquitous yellow icon into a mobile artistic canvas," according to a news release from Portraits of Hope, the nonprofit program that is organizing the effort.

The vast public art project, known as "Garden in Transit," originated with two brothers, Ed and Bernie Massey, who founded Portraits of Hope in 1995. The project was intended to provide creative therapy for seriously ill and disabled children, but has expanded to include children and adults participating through schools, after-school programs, hospitals and nonprofit groups. Portraits of Hope has decorated blimps, buildings, tugboats, airplanes and even Nascar racers; the taxicabs are the group's latest effort.

Ed Massey conceived of the idea in spring 2000, and after preliminary meetings with the city's Taxi and Limousine Commission, Bernie Massey, his older brother, led a team in developing educational and civic engagement elements for the project. The taxi commission unanimously agreed to support the project in July 2006, and Mayor Michael R. Bloomberg announced the event at a news conference.

"By unleashing the creative power and civic pride of New Yorkers, our city has come together for one of the biggest volunteer efforts we have ever seen," the mayor said.

Bernie Massey, 46, said the flowers were chosen for the project because children everywhere — including the hospital wards the brothers visited — draw them. "It's the one universal symbol of hope, beauty, life, joy, inspiration," he said.

(The Massey brothers grew up in Los Angeles. When Bernie was asked whether he and Ed, 42, enjoyed flowers as children, he said, "We liked flowers, but they were no more special than anything else.")

The cab owners and drivers do not have to pay for the flower patterns, and participation is voluntary. The vinyl flowers do not damage the cabs and are easily removed. The organizers hope to get a majority of the city's 13,000 yellow cabs to participate. At a news conference today at Union Square, the organizers unveiled six cabs with the decals. Each cab can accommodate two or three panels; each panel has one to five flowers on it. About 27,600 panels have been painted, enough for each cab to have two.

"The kids have done their part," Bernie Massey said. "Now it's up to the taxicab industry. The mayor's office and the T.L.C. are trying to rally the support of the industry."

Garden in Transit is a privately financed effort that has included about $1.5 million in cash donations so far. Helen and Peter Bing, a California-based couple, and Empire Blue Cross Blue Shield have been among the donors to the project. Vornado Realty Trust provided about 20,000 square feet of studio space, while MACtac, a manufacturer of adhesive products, gave deep discounts on the flower decals. 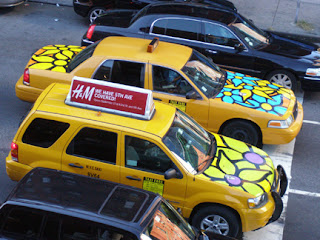 Ok. So I am going to throw in a bit of dirt on this project. I asked one of the drivers why he got the flower stickers. He told me that when he drops someone at JFK, he usually has to wait 45 minutes in a car line to pick up another customer. However, whoever agrees to have the sticker has the right to cut through the line. Now this is what I call coercion.

I haven't read anything abt. that. Interesting, I wonder if there's any truth to the cabbies story.

Hmmm, I'll have to do a little more research as I don't believe that detail is part on the initial projects plan.

How exactly would that benfit anyone other than the cab driver?